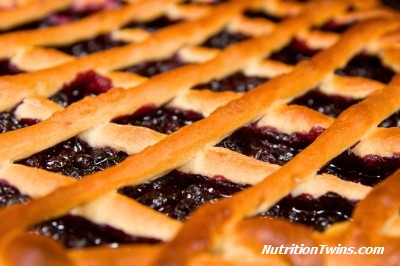 Why not celebrate by whipping up something quick and easy to take on the go?!

By popping some luscious blueberries in your mouth, you’ll be filled with antioxidants, vitamin C, copper, selenium, zinc, fiber and iron. And that’s just the beginning…

If you aren’t eating blueberries, starting is a must for your to-do list!

Want to slim down?

Research suggests blueberries are super skinny because they contain the phytochemical C3G that may increase production of both adiponectin, which enhances fat metabolism and leptin, which suppresses appetite. This means that blueberries not only help you to burn more fat but also help you to feel less hungry so that you are less likely to overeat! Woohoo!

Plus, blueberries are packed with fiber to help to keep you full…and to help flush out your digestive tract so you don’t experience bloat from constipation. This is all blueberry exciting news when you want to step on the beach!

With blueberries, you’ll also get antioxidants and vitamin C both that help to fight off free radicals which are known for damaging cells that lead to diseases like diabetes and cancer.

They have also been found to slow down vision loss, increase brain health and helps fight against heart disease.

Incorporating blueberries into your diet is obviously a must! Try these ways to get ’em in your diet:

Note: When we want to make this in a hurry, we bake the pie filling on twelve individual graham crackers so we end up with twelve mini-pies and it is out of this world!

If we want a more traditional pie, we use the crust recipe below that our client shared with us–it’s delish and so much healthier than traditional versions. (If you want to use store-prepared pie crust, just know the calories will be a lot higher).

If you are making pie crust: (If you prefer to use the graham cracker as your pie bottom, start at step 7)

Nutrition info will be similar using the Graham pie crust that you make yourself.

How else have you used blueberries to curb your sweet tooth?

Step Into Spring! Juil Shoes and The Nutrition Twins Veggie Cure Book Giveaway!
Scrumptious Shape-up Smoothie Contest
The Nutrition Twins with their Bestie at Age 7! Find out who she is and about the healthy snack comp...
Veggies Are Better Than Wrinkle Cream!