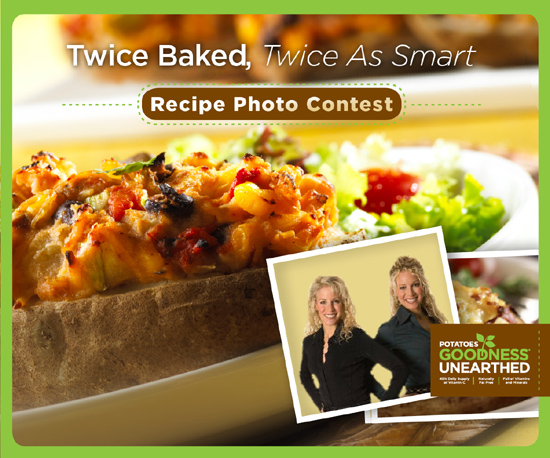 We ‘re excited to be working with the Unitied States Potato Bo ard (USPB) on an easy-to-enter Twice Baked, Twice as Smart recipe photo contest in which you could win $500 and a signed copy of our book, The Secret to Skinny! You can enter on our Facebook page by clicking the “Photo Contest” tab, or by visiting the USPB’s Facebook page, Potatoes, Taters and Spuds. Good luck!

We’ve teamed up with the United States Potato Board to remind potato lovers everywhere why potatoes are “twice” as smart and to announce an easy-to-enter recipe photo contest.

“Twice baked potatoes are twice as fun! Plus, you get twice the nutritional punch as potatoes are loaded with vitamin C and potassium.” Not only that, one medium-size (5.3 ounce) skin-on potato contains just 110 calories per serving and contains no fat, sodium or cholesterol.

Including the twice baked recipe is optional, but you are required to describe your twice baked creation with a creative photo caption. Entries will be narrowed down to the top five by a vote on Facebook and then we are so excited to announce that yours truly will serve as contest judges to select the Grand Prize winner and Runner-Up! Entries will be accepted until March 7th.