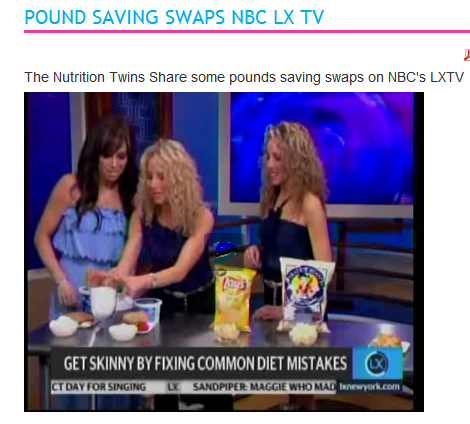 THE BREAKFAST MISTAKE: Cottage cheese is the ultimate diet food? Not so fast! A cup has 240 calories, 10 grams fat and 800 mg of sodium—more than ½ the amount that many people should get in their entire day. (If you are black, have HTN or are over 50, which is more than half of Americans you should have 1500mg of sodium or less a day).

THE CHIP MISTAKE: Potato chips. No secret here, these aren’t a good option. They’re high in fat, calories and sodium and a serving size is just an ounce. And who eats just an ounce?

THE FIX: If you really want a snack food and don’t want to feel like you’re depriving yourself go for something like Pirates Booty. They have the crunch and flavor you want but half the fat, fewer calories and less sodium (130 calories, 5 grams of fat and 120 mg sodium).

If you make this swap five days a week, over the course of the year you’ll save yourself four pounds and 144 grams of fat (that’s 29 teaspoons!) and 6 full days worth of salt! You’d have to speed walk for 40 hours to burn those 4 pounds off!). And remember, if you’re like most people and you don’t stick to an ounce serving, you’ll save yourself a lot more than this!

3. THE DINNER MISTAKE: Rotisserie chicken. It’s usually injected with sodium and it’s not the lean boy it’s made out to be. Most people eat the wings and skin. Swap a 5.4 ounce serving out.

THE FIX: Grilled chicken breast with Mrs. Dash. This is lean and tasty—you get the flavor, but without the fat, calories and sodium.

If you were to make this swap daily over the course of the year, you’d save 6 pounds and 106 full days of sodium

4. THE BEVERAGE MISTAKE: V8 Vfusion, Strawberry Banana. We know the Vfusion with strawberry and bananas may sound tempting with the juice of 10 vegetables and fruits, but that bottle is 240 calories and 50 grams of sugar!

THE FIX: Tea. It’s calorie-free and loaded with disease-fighting antioxidants and it’s rich in flavanoids which are good for healthy blood vesicle function, skin protection and other benefits.

If you were to swap out your daily V8 Fusion for a cup of tea you’d save yourself 25 pounds a year and more than 4,562 teaspoons of sugar!!

Which swap surprised you the most?